A Story of an Insomniac 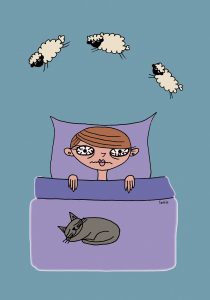 It’s three in the morning, all the lights are out except for the blue light coming from a laptop where music is streamed but not really listened to, she is staring at the ceiling with blank eyes, but with so many things running through her head. Nothing specific. It’s more of a confused state. She just wants to sleep. Her eyes are tired, her head hurts and her temples are starting to throb from too much use of a headset. But sleep is elusive.

Since she’s awake until early morning anyway, she tries to do something useful, but no, she is preoccupied but never productive. Even finishing this story is a big fight. It would be lucky if she could finish this in one sitting.

So what’s keeping her up at night? Insomnia. Insomnia is the inability to fall asleep or stay asleep at night, resulting in unrefreshing or non-restorative sleep. And it’s a very common problem, one that takes a toll on your energy, mood, and ability to function during the day. She has tried everything she could find on the internet just to get a better sleep. The surrounds herself with pillows, around 10 of them. She has bought comfy pajamas. Despite the efforts, night after night, she’ll watch the sun disappear, the moon crosses the sky, until dawn before the horizon starts to turn orange. The darkest hour is her favorite, just before the twilight. She’ll watch the lights from the other buildings turned off one by one from her window until they are turned on once again. That’s her signal to finally close her eyes.

She wants to know the reasons. She have battled against it before, but that was because she was stressed from too much school work when she was a student, the last time she experienced it the longest. She is aware that this time, everyone must be fighting their own battles. Nobody is spared. And she thought it’s probably homesickness, and that the virus may have not infected her, but the whole situation is starting to take its toll. It’s been several months anyway.

But one good thing is that she was able to write a whole piece today, before the roosters starts to crow. Truth is, there aren’t any rooster nearby, just the alarms of her housemates for the morning shift.

How she misses that kind of noise in the morning, signaling the beginning of a new day. She loves the sunrise. She loves watching the glow over the horizon. She loves morning coffee and the smell of the morning meals, although she doesn’t really eat breakfast. She likes early morning walks. She revels in the morning breeze. She has a good view of the sunrise from her room, but there is no fresh air touching her cheek. She loves the golden hour, too. It is the perfect time for photos that she can post on Instagram of My Day on facebook. But she hasn’t been in the mood for a while now. She prefers staying in the room, in front of the pc, trying hard to be productive but painfully fails every time. Each passing day feels like a wasted day, every passing hour is an hour of emptiness.

But whether she has slept the day before or not, she has to drag herself off the bed so she could have some brunch. She’ll have small talk with the others before going back to the room and try to work on something. Her appetite is a hit or miss. Sometimes she likes binge-eating, at times she just skips every meal and only takes a bite when she’s starving.

But ‘she’ isn’t alone. There could be a lot more ‘She’ during these times. ‘She’ could be someone you know, someone you just met, or just someone out there surviving alone. The thing is. we don’t know what each of us are going through right now. Instead of judging, may we choose to be kind every time.  So for now, it’s a race between the sun and her eyes. Good night, or should I say, good morning. I hope you had a good sleep.