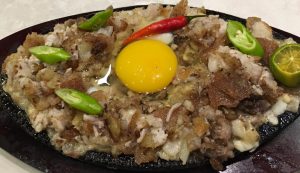 If you come to the Philippines and in want of a cold beer, you’ll probably hear a popular recommendation of dish to go with it; sisig! The spicy and salty mixture of minced pork, onions and chicken liver makes it complement the bitter taste of the drink. It is indeed best paired with spirits and liquor although it can also be served along with warm white rice on the side.

The presence of the US embassy in Pampanga,the culinary capital in the Philippines is said to have played a vital role in the invention of the dish. People can buy cheap pig heads in commissaries because these are not normally consumed inside the base. Meat from the pig heads are scraped out, boiled, grilled, and made into what is now known as Sisig.

Traditionally, as mentioned earlier, meat from pig heads were used as the main ingredient. But in the recent days, there have been a lot of versions of the dish. Squid Sisig, Tuna Sisig, Bangus sisig, and Tahong Sisig are some examples. For healthier option.chicken is now gaining popularity for those who can’t eat pork.

Pork Sisig has its variations as well. Pork belly is usually used but some still stick to the traditional way. Pork shoulders comes second in popularity although many people now mix the small and big pig parts.

To whet the appetite further, the dish is usually served in sizzling plates or metal ones to keep the heat longer. So this rain season, you might want to try the glorious combination so let me teach you how to make this Pinoy delicacy.