Finacial Literacy; When To Start? 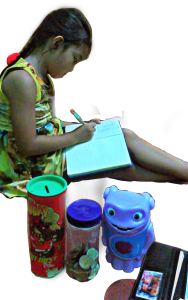 Five. It was when I allowed my kids to hold money for the first time. During their earlier years, they were scared to even touch coins, let alone bills. I told  them it was not appropriate for them to do so. That is why when they needed something or would like to buy some candies and stuff, they have to ask me or my mom,who is serving as their guardian in my absence. My methods were frowned upon by others who let their kids hold money as soon as they can.I didn’t listen to them.

Six. I introduced the idea of saving money to them at this age. I bought them pink piggy bank, with a ribbon as its tail and put the initial amount for them. I taught them that if they set aside from them allowance, they can put the rest in their piggies and I’d double the amount during their birthdays. They ask what it was for. It was for the future,I answered.

‘What’s in the future?’, they asked. Instead of giving an answer, I asked them what they wanted to do when they grow up.

As listeners to my constant teachings about the beauty of being independent, they answered, ‘Going to university, traveling the world, buying some presents’.

‘Don’t you want to be rich?, I prodded. ‘Of course, we do. That’s why we want to go to college!’, my eldest daughter exclaimed. ‘That’s why you should start saving now’, I remarked.The conversation went longer as they shared their dreams and how they are going to accumulate wealth in the future. i wish them all the best.

Seven. That was the age of my eldest daughter when I opened a bank account under her own name. Seven because that’s the minimum age requirement for such. They another account for my youngest the next year. They know they have it. They still have their piggybanks. They know how much they have.

One day, I asked my eldest ‘May I borrow some of your money? I need to pay some bills’.

She looked at me with narrowed eyes and said, ‘ How about our future then?’. That’s when I felt like they’ve understood my purpose at least.

I gave them lavish 7th birthday celebrations because that’s how it is recently. But after that, I talked to them that there will be no more grand celebrations on their succeeding birthdays. They have tried everything and experienced the luxuries other kids haven’t experienced. They’ll have a simple celebration then the money we were supposed to spend more shall go straight to their accounts. They agreed. Their Christmas and birthday money gifts are deposited, too.

Along with the simple celebrations, I also put restriction on their expenses. Whenever we go out, they can  buy pretty much anything they like, but should be within the allowted budget I gave them. If they buy beyond it, they won’t be able to buy anything the next time we go out. But if they manage not to spend it, I’ll double it and put in their banks again. That’s when they learned to look at the prices first before asking to buy and consider whether they really need to buy it or just have a bigger savings.

Eight. The first time that they were able to get an allowance to school. Before then, my mom have to prepare all they needed; lunch, snacks and other expenses. I told my mom to stop preparing these things for a while and give them some amount instead, so they could learn how to spend their money. i specifically asked the kids to set aside some amount for their piggies. The first day was a disaster for they spent all their money for anything edible but lacks nutrition. Although my mom hesitated, I gave them a second chance after a long talk at home. The next day, they managed to feed the pink piggies.

Until now, I try to do constant deposits on their account and these are safely hidden away from me. Only I can control the account but since it is in my hometown, no one, not even I can touch it: one good thing about being away during this precarious times. Their money are left untouched and I never felt prouder of myself and my daughters.

The idea of opening accounts for my kids aren’t entirely planned by me at all. I was a spendthrift and an indulgent mom at first. My sister, who is really good at managing the purse strings talked me into it. I started with really small amounts until I felt good seeing the numbers grow little by little, under my kids’ name.I felt a bit more secure for them.

Next time, I am planning to let my kids learn about the market by letting them earn their own keep in some ways. I want them to experience the market and trade by themselves. I want to let them show their potentials or the lack of it, so we can work on it as well. It may be a bit late, or early, depending on your own standards.

They say the future of the economy lies on the training of children. Financial security and financial literacy are totally different concepts and doesn’t necessarily go together for most people. Most parents make the mistake of inculcating the wrong idea to children. ‘Study hard then look for a good company you can work and earn money’. But successful people say, ‘ Study hard and learn how to make money and create opportunities. Build your own fortune’.

Sad to say,a large chunk of the population aren’t sufficiently or properly educated about money. Most families live in ‘one day millionaire’ mindset. Meanwhile, many people are scared about the idea of savings accounts, investments and insurances. No wonder many families are left with nothing or even large debts when tragedies arrive such as illnesses, accidents and contingencies.

I can’t say my methods are right nor good. All I can say is that it works for us, for our circumstance. Neither am I good at financial management. It was something I learned late and still learning. And as I do, I am letting my children learn with me.