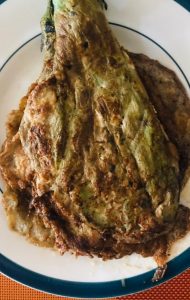 I am not a vegetarian but I love vegetables. In fact, I can eat almost all vegetables except pumpkins and celery. How about you?

By the way, I will teach you a common Filipino veggie delight. When I started working at this company, I expected to learn how to eat more Japanese food. To be honest, I wasn’t a big fan pre-aimtalk days. I prepared myself for it but when I had a chance to eat with our previous Japanese staff for the first time, I was surprised to see them eating Filipino food instead, and one of them said he has gotten so into one dish; the eggplant omelette. He used to eat it several times a week!

Eggplants are available all throughout the year and quite cheap, too. It is a very flexible vegetable so it is not surprising that it is present in many Filipino dishes. But today’s dish is one of the few dishes that eggplant was the main ingredient. It was a pretty simple dish. The ingredients are quite simple and easy to find. There are several variations of course, but I will teach you how to cook the most basic and most common variation. Some people like adding ground meat and other ingredients, too.

Actually, the eggplant omelette can be served as a main dish or a side dish to a bigger meal. It is commonly served for breakfast or lunch. It is nice when eaten with some fresh onion and tomato salad and a bowl of steamed rice.

So if you want to take a break from meat and fish, try this vegetarian delicacy. Here we go!