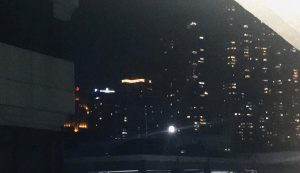 Free at last! Three and a half months. That’s the total of time we spent in the office during the Enhance Community Quarantine (ECQ) or lockdown in Metro Manila. I’ve seen how the former brightness and flickering lights of the country’s Central Business District,as if it’s Christmas every day, dimmed and faded at night. Although it sounded harsher than it really was, we were relieved to be able to get out finally! The days of looking out and seeing the same scene day and night was finally over,or is it?

(Photo taken from the office window on a Monday night. The Central Business District wasn’t as bright as it used to.)

But how was it after being secluded for quite a while? For several weeks, all we could do was stare out the window and see the few cars passing by. And as time went on, as the number of passing cars increased, we saw how the number of people outside grew little by little as well. We couldn’t help but envy them, but at the same time, we felt sorry and worried that they are taking huge risks just to earn a living, while we were ensconced safely indoors while also earning our keep without being exposed to danger.

It took longer than we expected to move out from the current place and move in to the new one. There were more requirements needed including the COVID-19 test. It was painful particularly for me. I am terrified of needles and other pointy and sharp objects, It was a real torment just thinking how they’re going to poke my arm and squeeze blood out of me. The test was called the rapidtest which requires blood sampling and it can only detect antibodies. The swab test or PCR requires samples from the nose and throat and actually tests the presence of the COVID-19 virus in the body. Having the rapidtest were the longest 30 seconds of my life! To our relief, the result was out 8 hours later and I and my other colleagues were all negative.

The moment we had to move all our things out, it was a bittersweet memory. The empty room reminded me of the years of being with everyone else. I was a bit apprehensive to go out in the open. What if the virus has become airborne? What of the driver of the car is asymptomatic? What if the other people I have to mingle with are silent carriers? I was a bit paranoid. And yet, I was glad. The moment the dry air touched my cheeks, it felt marvelous! It’s as if I was a toddler learning to walk again. I felt the familiar rush of people coming and going past me. It felt different, yet similar. I felt liberated!

Before I settled to the new place, I had to go to my previous apartment to fetch some things. I saw how the ordinary 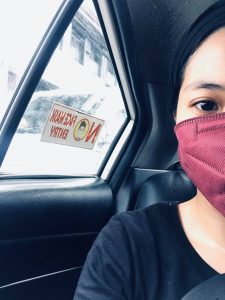 people behaved even though there were still restrictions in the area. The virus felt tinier than I had imagined while inside the office. People are walking freely on the streets, some of them violating the guidelines on wearing masks and proper physical distancing. Some small businesses are back in operation. It felt like my fear was magnified while in seclusion. Ordinary people aren’t as concerned as I was or if they are, they don’t show it.

Although country is still in bad shape and is continuing to record bigger numbers of new cases every day, more people are braving the risks of exposure; for the family and for the economy. We now understand that it is up to us to live and and be safe amidst the pandemic. We need to keep our distance from each other, but working closer together, so we can all survive. It’s funny, truly. The bigger the distance, the wider the physical gap, the bigger the love and the deeper the concern. Ironic,isn’t it? No man is an island they say, but we are better off away from one another. It is the only way to live, for now. 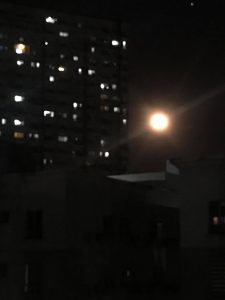 I thought our life would be much different after moving in and yet,it feels pretty much the same. But now we feel safer at least, to have our own space and time. We see different lights at night, hear different sounds during the day. We see children playing within the premises, the clamor at the open air. We see people riding their bicycles for leisure,unlike the commuters in their bicycles we used to see every day. Now, we look at the moon at a different angle, shining brightly on us as if welcoming us, lighting a new path. We smell various dishes being cooked, the fragrance of coffee wafting through the corridors in the morning. We see pets wagging their tails to welcome their master, and bark at strangers passing by.  We see curtains being drawn at night and lights being turned off to end the day. It felt more normal, more alive, more like home.

(photo captured from the terrace at night)