Note: This section called the ‘Food Corner’ shall be a series dedicated to Filipino dishes. The author will try to include a recipe of the featured dish at the end of the article. However, the recipe that will be presented is only one of the various ways. Each region has a different version of the dish and the author only presents what the taste that she prefers.  Disclaimer: the author is not a professional nor an expert cook. The only expertise she can lean on is eating. Let’s dig in! 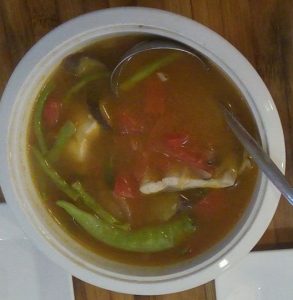 Up for soup with extra kick? Well, here’s sinigang for you. The sour and savory taste is refreshing in summer and the hot,steaming stew is great in cold weather.

Sinigang, from a Tagalog word ‘sigang’ which means stew, is an all-time favorite dish associated to tamarind (Tamarindus indica) and is known for it’s distinct sour taste. For some, it can be an acquired taste; the more you try, the more you’ll learn to love it. The dish is cooked in a sour and acidic broth from fruits,tamarind being the most popular. It is known all over the country and has various varieties depending on the source of regional available ingredients. Sinigang is different from other ingredients for it’s more watery soup and large variety of vegetables included in the dish. But a small caution; if you are terribly acidic, you might want to adjust the level of sourness and eat with rice,preferrably white or steamed rice.

The most common must be the Sinigang sa Sampalok (Tamarind) as the fruit is present all over the country. In some areas, not only the fruit was used but also the young leaves or tops. Although powder mixes are already available in the market, it is nice to stick to the traditional way of cooking as it is more organic,hence, better to the health. Some of these fruits can be used for the sour taste in the absence of tamarind or the powder mix: unripe/green mangoes, unripe starfruit, ripe guava, kamias (Averrhoa bilimbi) and calamansi/lemon or lime as soup base.

If you prefer a thicker or starchy base, you may add some taro(root crop) and for more umami taste, add some misso. To season, fish sauce is usually used although salt also do the trick.

As for the main ingredient, meat and seafood are all good. Commonly, pork and beef are pfererred. For seafood option, fish,  shrimp, squid, sea shells are combined in this soup. Prawns or shrimps can be cooked without the other seafood and is loved by many. 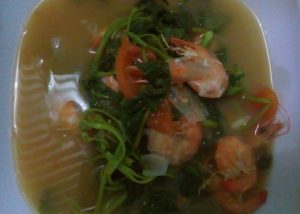 Vegetables such as water spinach, eggplant, okra/lady’s finger, white radish and yardlong/string beans are mixed. For the distinct Filipino taste, long peppers are added to give a hint of spicy flavor. The usual onions, tomatoes and garlic are of course present. Although sauteeing the ingredients isn’t necessarily prohibited, it is not the traditional way of cooking it.

RECIPE: The author included her personal, ‘No Saute’ recipe although variations are available online.

1 eggplant, quartered or sliced into 1/2 inch half round

6 pieces taro/gabi, peeled and halved depending on size (Optional) 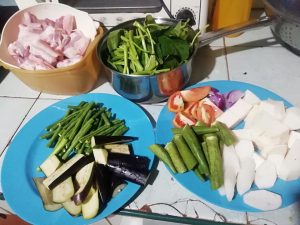 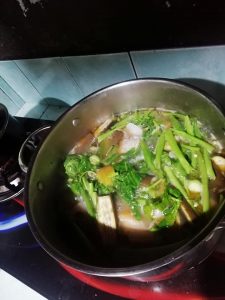 Note; To bring the juices from the tomatoes, the author prefers if whole, rolled on the surface many times to make it soft then added to the broth until it naturally bursts.

In the absence of tamarind powder mix, use any of the following for the base:

Tamarind fruit – boil the pods; then, mash its juices through a strainer