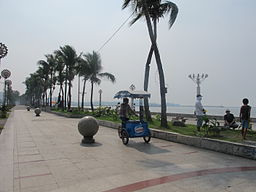 Around 5000 government employees, volunteers and students armed with broomsticks and trash bags participated in a massive clean up drive of Manila Bay on a weekend in January 2019. It was to kick off the inter-agency cleanup that the environment department expects will take years.

Manila Bay is a popular tourist spot in the Metro, with breathtaking sunset and view of the vast sea. The natural port facilitated the trade and commerce between the Philippines and its neighboring countries. It was the setting of the Battle of Manila Bay in 1898 where the US showcased its Naval strength, destroying and capturing all major Spanish ships.

In 2002, the city of Manila initiated to enhance the seaside promenade through urban renewal, upkeep and improvements. The Baywalk then became popular area for exercising and other social activities due to the public’s free access. Recreational and entertainment establishments flourished. However, it was proved detrimental to the bay area as the influx of visitors resulted to vagrancy, mendicancy and pollution. Illegal settlers and establishments contributed to water waste that raised the coliform level up to 330 million most probable number (mpn), 3.3 million times above the standard 100 mpn that is ideal for swimming. The area was then plagued by various water problems. According to the Environment and Natural Resources Department, some Php47 billion is needed to clean up Manila.

Not long ago, the government shut down establishments around the area who were proven to have violated or disregarded environmental and sanitary standards. Illegal settlements were relocated.  More law enforcers were dispatched to guard the area against illegal activities.

Furthermore, with a concerted effort of environment advocates, volunteers and the government, the first phase of the clean up drive was started months after the rehabilitation of the well-known Boracay beach. The then seemingly a dumpsite became litter-free. Sand was in full view on the beach. No beggars sleeping and loitering around.  Citizens proved that nothing is impossible when individuals work hand in hand. The challenge is now on the sustainability of such efforts.

It took thousands of pairs of hands to work as a beginning of worthy challenge but it is now everyone’s responsibility to keep the bay clean and livable. It depends on the law enforcement to maintain the current peaceful and litter-free place but it takes discipline to improve the present situation. It remains to be seen just how long this place can remain as clean as it is today. Who knows, in few years, people and families can again enjoy dipping in the waters that once gave them the taste of freedom from colonizers in the past.

promenade: a walk for pleasure in a public place

flourish: develop well and be successful

vagrancy: criminal offense of living on the street and begging from people

mendicancy: someone who asks people for money in order to live

coliform: a type of bacteria

plague: cause trouble to someone/something, especially for a long period of time

loiter: stand or wait somewhere, especially in public place without any clear reason.