Balangiga Bells Returned to the Philippines after 117 years. 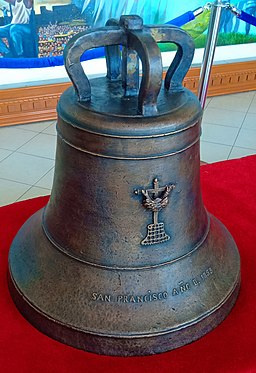 After over a century, the bells are back home! This year, the bells arrived in the Philippines 11 December  and was returned to the Balangiga church in  December 15. One of the three bells had been kept at Camp Red Cloud, the US base in South Korea while the other two were at F.E Warren Air Force Base’s Trophy Park in Cheyenne, Wyoming.

The bells and the Balangiga Massacre.

The Balangiga bells are three church bells that were taken by the US army as spoils of war from Eastern Samar, Philippines in 1901. One of the bells were used to signal the attack to the US Company C, 9th Infantry.

The Balangiga Siege
On 28 September 1901, a group of Filipino villagers from Balangiga  ambushed the U.S. Infantry Regiment while they were at breakfast, killing more than half of the 78 soldiers and wounding 22 and only 4 unhurt and 4 missing, The attack was prompted due to the  US forces’ destroying and burning the villagers’  crops, ill-treatment  to women and jailing of men.  The ambush was said to be one of the biggest defeats of an American Army since the Little Bighorn in 1876

The Balangiga Massacre
The real massacre was what happened after, In retaliation, the General Jacob H. Smith ordered that Samar be turned into a “howling wilderness”. The order was to shoot any Filipino males who was capable to bear arms; the age limit was 10. The whole town of Balangiga was burned down. There was an indiscriminate violence and punishment to the people.

General Jacob Smith told Major Littleton Waller, “I want no prisoners. I wish you to kill and burn; the more you kill and burn, the better it will please me… The interior of Samar must be made a howling wilderness…”

After the atrocious event, the the President Theodore Roosevelt ordered prompt investigation.  The commanding officers were found guilty of torturing Filipinos and so were court-martialed and forced to retire.

What’s the significance of the return of the bell?

The bells represent the rich history and heritage of town of Balangiga, an emblem to the  aspirations of their forefathers for freedom and liberty.

The return of the Balangiga bells could serve as a symbolic closure of the Philippine-American war and once reinstalled in the Catholic Church of Balangiga in Eastern Samar, the bells will serve as a memorial to the gallantry and bravery of the people of Samar  who were among the last Filipinos forced to sing the Star Spangled Banner.

The past doesn’t define the future but there are some wounds from the distant past that just don’t heal unless given with a proper closure. May the atrocities and barbaric events in history won’t be repeated again and may the sacrifices of the forefathers be remembered and inspire the humanity to strive for peace and harmony.

prompt(v): make someone to decide to do

massacre(n): the state a lot of people are killed violently

retaliation(n): action against someone who has done something bad to you

aspiration(n):  a strong desire to have or achieve something

gallantry(n): courage, especially in a battle