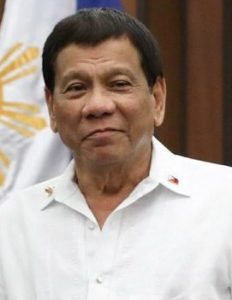 Philippine President Rodrigo Roa Duterte is referred as “the Trump of the East”. But unlike Trump, Duterte is an experienced politician (served as vice-mayor and mayor of Davao city from 1986 until 2016) and a seasoned lawyer. But what drew the international community interested in him?

First, his language. Unlike conventional politicians, he talks the way he wanted  and shall we say ,bordering to inappropriate?  He doesn’t seem to mind what comes out of his mouth. Many of his statements come as shocking. Critics or even some supporters say it’s unbecoming of a leader.

Second, his actions. Together with his language. some of his actions are also controversial, and at times, appalling. Imagine a president kissing a supporter in the lips at a public event? Well, he did just that. But he claimed there wasn’t any malice in it and it’s true that the woman gave her consent. ( https://www.youtube.com/watch?v=nEcok2YCl70 )

Next, his beliefs. It is widely known that Pres.Duterte leans favorably towards US Pres. Trump and Chinese Pres. Xi Jinping. Probably one of the pictures that people didn’t want to imagine was Trump and the “Trump of the East” coming face to face. Yet it happened. And despite the trust issues, Pres.Duterte hugely deals with China. In fact, the biggest project of the Philippine government known as Build!Build!Build! which aims to build more infrastructure is  feared to make the country fall for what is referred to as “debt-trap’ by China.

Finally, his strong stance on illegal drugs, and the extra-judicial killing issue. It must be one of the most infamous belief on the president. Many drug criminals are gunned down on streets. The police raided suspected and reported drug dens frequently in various places that often resulted to encounters and a suspect being killed “for resistance or for fighting back”. High-profile drug criminals were apprehended together with hundreds of pushers and peddlers. Prisons were over-populated. The country was tagged “dangerous” to foreigners and was even listed most dangerous for media men. The belief of extra-judicial killing’s existence circulated because of Duterte’s strong approval on execution-style punishment of criminals.  The image of the country suffered. Even the International community wanted a piece of the said president. Drug-related crimes still exist up to this day.

For several months, inflation rate was record high. Income tax laws were amended. More criminals are gunned down, but no solid evidence can prove that the government is behind them despite the many accusations otherwise.

BUT for the first two years of his term, transportation looks brighter with more trains  in operation; subway is in the making on the horizon.  Jeepneys are to be modernized. More airports are being built. Health care is almost free. Education became more affordable; in state universities and colleges – it’s free!

It’s true that Duterte has a love-hate relationship with the Filipinos. He hates the mainstream media. Traditional media men say their freedom is curtailed, yet they can openly criticized him.  People claim democracy is dead, yet, protests are staged anywhere. They complain of high inflation rate but nobody notices the higher employment rate.

In the author’s opinion, fear was magnified due to the images painted by the media and was exaggerated in the mind. Politics is like that. I think one should have a first-hand experience in order to form a fair judgment. Until solid evidence is presented, everything remains as allegations and proves nothing. Besides, there isn’t a regime untainted by controversies. Duterte may not be perfect, but in this current situation my country is in, he may be the best one we can have.

conventional(adj): used for a long time and considering it usual way

controversial(adj): causing a lot of disagreement

malice(n): the desire to harm someone

consent(n): permission to do something

infamous(adj): well known for being bad

raid(v): visit suddenly especially, to search for something illegal

amend(v): make small changes to a document or speech

magnify(v): make something seem more important than it really is ≅ exaggerate

untainted(adj): not affected by something bad