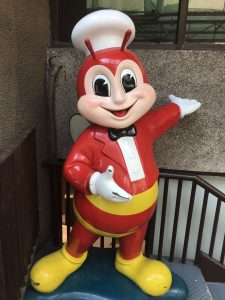 Have you ever seen a bumble bee dressed in red blazer, shirt, and chef’s hat? That’s Jollibee!

Jollibee is the main mascot of the largest fast food chain in the Philippines. Although loved by people across ages, it is specially appealing to children due to it’s lovable figure. Unlike the scary clown, Jollibee is an adorable and talented mascot as it performs dances according to the current trends. The stores accommodate parties and events and you can request for the mascot’s special appearance alone or with the gang. The group includes Hetty (spaghetti), Yum (burger), Twirlie (sundae) and Popo (french fries).

But why a bee? According to the founder, it is compared the the Filipino working class, busy but still happy.

Jollibee merchandise such as dancing Jollibee dolls, and pillows  can be bought at stores including limited editions on special occasions and events.

Jollibee Foods Corporation was founded by a Filipino-Chinese businessman Tony Tan Caktiong and his family in 1975. Caktiong was born and raised in a poor family in China and migrated to the Philippines together with his 6 siblings in hopes for better future. The business was originally an ice cream parlor but due to customers’ demand, they started to serve sandwiches and hot meals. After noticing that the meals were more popular, the family decided to replace the ice cream shops into fast food outlets in 1978.

Mcdonald’s was proven to be difficult to beat but Jollibee was able to rival and withstood it. Why? The rival McDonald’s, according to Caktiong,  “didn’t know local food culture”. In an interview where Caktiong was asked about the business’ secret, he said, “Just make sure your food is really tasty”.

At present, there are over 1000 stores in the Philippines alone and 150 branches in foreign markets like the US, UK, Southeast Asia and the UAE. The Corporation also owns popular food chains like Chowking, Greenwich Pizza, Red Ribbon Bakeshop, Mang Inasal, and Burger King Philippines. The CEO’s estimated net worth is about $4.0B and on the Top 5 richest Filipinos.

What’s Popular and What to Try

The chain operates 24/7, where menu changes from breakfast to main meals and desserts. The author will share her personal favorites on the menu.

It may be difficult to penetrate the international market but Jollibee has put up stores in countries like the US, Canada, the UK among others. So how does it fare? As they say, Filipinos are found almost everywhere in the globe so it’s no surprise that Jollibee stores are filled with customers, mostly Filipinos, while others are curious locals. To many Filipinos, Jollibee is a place to meet fellow Filipinos. The taste of the dishes makes one feel nostalgic and remember their childhood. From those who miss their home-cooked Filipino meals, it’s a welcome retreat. It’s a slice of the Philippines brought to their doorstep. It’s like a home away from home.

migrate(v): go to live in another country

be filled with: make it full with something

nostalgic(adj): feeling happy when you remember the time in past